When a SUKHOI flew over my head

I always hated the location of my college campus. Far away from the main Bangalore city, in midst of nowhere. Until, 2 years ago when I experienced my first Aero-India Show. The plus point of this location is that we have an Indian Air Force base across the road. Yes, just cross the road and jump over a boundary and you are on the Air Force grounds (of course, you might be shot for that though).

Two years ago, we found ourselves lucky to witness the Aero India Show happening right over our heads and now we are twice lucky as it has started again.

The thundering sounds reverberating the atmosphere leaves you with goosebumps and high heart-beat rate. Not once you feel like turning your head down when the brave pilots play around with aircraft, faster than the speed of sound, twisting or taking it vertically high and whoosh, they vanish into the blue sky.

The very enthusiastic first timers sprinted towards the hostel terrace, leaving their unfinished work and rooms unlocked as the engine ignited on the runway. And then to cheer the zealous crowd on our hostel terrace, the pilot took one round right over us as if he had just heard the masses lauding for him. For the first time, even the girls were allowed to climb up on the boy's hostel terrace for a better view of the air show. But even the girls failed to make the boys turn their heads when everybody was glued to the sky watching the show-stealer perform his stunts.
"It's an F-16, macha...",
"No dude, it is a Rafael, it has two engines...",
"It could be a Sukhoi too...",
"Can't be, it has two tail wings..."
Everybody was trying to be an expert.

The actual show is scheduled from 6th to 10th of Feb. But, the stir begins from the very first day of the practice session which begins about a week ago. The last day of the practice session, the final rehearsal day was a free entry for the Air Force families and with the help of one of my friend's father, who works there, I got a free entry too.
As soon as I stepped into the Air Force grounds, I somehow became too disciplined. I scanned the area around me, I was surrounded by uniformed men with their families. I walked through the security check and reached very close to the runway. People scattered according to their convince near the fence guarding the runway to get the best view. Some families had bed-sheets spread with lots of home-made food to enjoy with the show.
The vigilance team did their drill before the show began.

The show began with the display of Rafael aircraft. The pilot waved to the crowd from his cockpit before the take-off and the restless crowd waved back, whistled and applauded. And then, the engines ignited. Before I could move my eye lenses left to right to capture the whole motion, the aircraft had already took off with its lightening speed, leaving behind the roaring sound which hit my eardrums after a few seconds. As soon as he took off, the plane went straight up vertically and disappeared for a while. All heads were up, hands upon forehead to counter the sun, eyes shrunk , trying to figure out the jet's position. And then finally, he was back with a free falling motion and with a sudden throttle the plane was horizontal again. He continued to impress the crowd with amazing dare-devil stunts before finally resting. 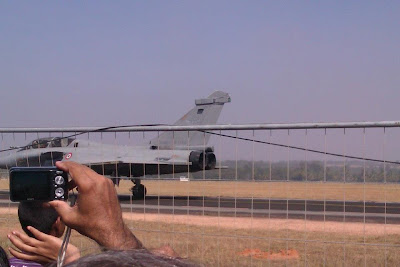 Before the next jet plane, choppers entertained the crowd with different moves. Off all the choppers, team Sarang won hearts with their breath-taking stunts. The team of 4, flying red helicopters, leaves you open-mouthed when they fly so close to each other. 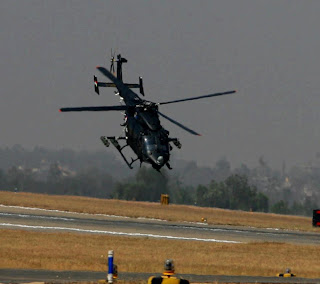 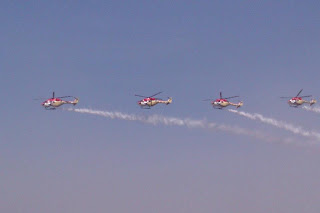 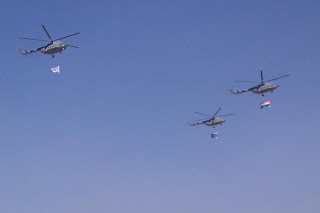 The next jet that was displayed was Embryo used for refilling and RADAR communications, designed at HAL, not yet a part of Indian Air Force. 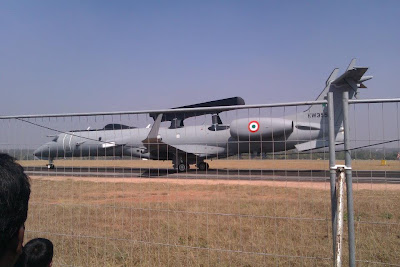 Other attractions that made eyes glued to the sky were F-16, Tejas and Sukhoi. Team Red Bull and others would be joining Aero India 2013 from 6th Feb Onwards.

A hearty Salute to Indian Air Force.
And I dedicate these lines to all the brave pilots:

This Blog is Awarded