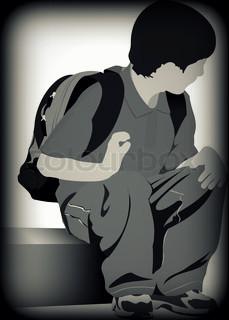 “Reading other’s personal diary is not a good idea, you know that, Malhar.”

“Yes, Alimah, I know but this is the only way to find out what is wrong with the boy.”

The boy never talked much. In fact, in the initial days when he joined the new school, everybody had a feeling that he was mute. He wouldn’t speak until he was asked a question and used his words in a laconic manner.

“Or maybe he is just another introvert?”, Alimah pressed.

“His unusual taciturnity concerns me, Alimah. His behaviour is very different from a ‘just another’ introvert”, Malhar defended.

It was his third year in the school but yet he didn’t have anyone who could be called his friend. When in recess everyone shared their lunch boxes, he would sit alone on his bench and finish his lunch. All his classmates would play and participate in sports and other activities while he spent the same time in either library, if permitted or writing his diary, at a solitude corner on the playground, under a tree.

“By the way, where did you find this diary?”, Alimah asked.

“He dropped it on the playground today and I picked it up”, Malhar explained. “And do not worry; it will safely reach its owner tomorrow.”

“You never discussed his problem with the other subject teachers?”


“I am concerned because I am their sports coach and his inactiveness bothers me. And how many more questions do you have?”


The teachers were not too much bothered since he was pretty good academically. He scored well in his subjects. But, he was physically dull and weak compared to his other classmates. He usually remained scared to even look up into anybody’s eyes while trying to converse.


Once, they had a public speaking event and it turned out to be the worst day at school for him. He became a punching bag of the class.

“Now I can’t even ask questions to you?” Alimah fumed.

“You can. I just wanna help this kid, but, stop interrogating me.”


“Interrogating? I thought I was helping but-“


“Why don’t you leave me alone for some time? It has been a busy day.”

“Sure! Am gonna sleep in the other room, good night!”, Alimah slammed the door behind her.

“Couldn’t have been a better night”, Malhar replied in rage.

“Alimah, Alimah… I am really sorry…for last night, I shouldn’t have-“, Malhar woke her up.

“Actually, it was me, I was really irriating-“ Alimah prompted. “Forget it, let me make us some tea.”


Sipping the refreshing tea, Malhar continued, “Well, now, I think I know what the kid’s problem is.”
Puffing air to cool the hot tea, Alimah looked at him with fishy eyes, “You read the diary, didn’t you?”


“Sorry, but committing sin isn’t my cup of tea.”


“Okay. Your wish but I still recommend you to… read a bit of it. Little sin with the morning tea is fine. You wanna help me or not? While I go take a bath, read this entry, the answer is here, this page…”, Malhar bookmarked the page and left.
Alimah gave up, took a deep breath and started reading.

Today, Mumma is very sad again. I can hear her sobs echoing in this silence. Daddy is very angry on her. I was really scared when they were fighting. I wanted to play with my Daddy and finish today’s homework with my Mumma but they were late from their office again. And Daddy was very tired and Mumma had to cook the dinner. So, I did my homework alone. Then, while we were having dinner, Daddy became very angry, so angry that he threw away his plate and the food were spilled all over the floor. The cracking sound of the utensils frightens me. I think he didn’t like the taste of the food so he was scolding her. I didn’t dare to look up from my plate as I finished my dinner. They were screaming so loud that I wanted to close my ears and my eyes to not see him slap her again like last time. I wanted to stop them but I was very very scared. I really want an angel to come soon and make us all happy.

“We are never letting this happen to our child”, teary-eyed Alimah said.

“Now tell me, angel, how are you going to help this poor child?”

“Oh! Alimah, how many questions do you ask?”, Malhar giggled.

Ashish
Posted by Ashish at 3:27 AM

This Blog is Awarded